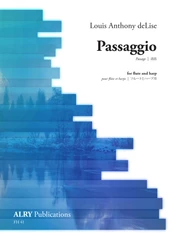 Louis Anthony deLise’s Passaggio for Flute and Harp was written for flutist Joan Sparks and harpist Anne Sullivan. The compositions included in this suite are arrangements of solo piano pieces by deLise which began as improvisations, including “Early January,” “In the Edge of the Water,” and “Spring Rain.”

Though originally composed for flute and pedal harp, included in this edition are lever harp arrangements of the first two movements. The third movement, being completely diatonic, is suitable on both pedal and lever harp.

Passagio for Flute and Harp sheet Music is available for purchase from ALRY Publications.